Looks like a cute motorcycle, right? Except that it takes you from 0 to 100 km/h in 3 seconds and from Estonia to Italy in a matter of mere hours.

This is something especially for Him and for the courageous Her: meet KTM Super Duke 1290 GT, one of the fastest and most expensive bikes you can find in the Estonian motorcycle stores. Our test driver and motorcycle enthusiast Andrus Albi will share why he loves motorcycles and how it has changed his life.

You are probably thinking: why is there a story of a fast motorcycle when we usually bring you designers and their clothing? You are right – but Wuruhi is also about different lifestyles. This time you get a chance to meet one of the most charismatic people we know: Andrus Albi who is 200% passionate about motorcycles and writes a unique and popular blog called Andruse Mootorrattad that is not only about the technical details of the bikes but also about how riding them feels.

When you read his blog, you will notice one thing though: Andrus is never on the pictures, it’s purely of and for the enthusiasm for bikes. Wuruhi thus had quite an exclusive honor of first, dressing him into special designed clothing for bikers that is excellent for the upcoming summer, and second, capturing and exhibiting his relationship with bikes.

How long have you had a passion for motorcycles and how did it start?

I can’t really remember where it started but I did annoy my uncle to death to give me his Russian Riga moped to ride. It was broken more times than it was working and I was probably 12 or something.

I think I pretty much always wanted one. When I finally had enough money to buy one, I wanted a sports bike. One of my co-worker’s husband had an enduro bike (street legal dirt bike) and offered me to try it out before buying a street bike. I fell in love with dirt bikes from the first ride. So my first own bike was a dirt bike. Later on when I got better at business and bought street bikes as well.

There are so many reasons why motorcycles are amazing. I could write a book about it -maybe someday I will. But I’ll give you some of the main points.

When you drive cars, it’s exciting first year after you get your license and after that it’s a chore. With bikes it never is. Adrenaline is always in, you always have to be watchful of others and the road. You feel the road and wind and air instead of watching it from behind the window. When you set out before sunrise, you can feel the air changing when the first rays come out – it’s amazing and most people miss all of that because they sit in their cars.

A lot of people hate commuting to work and back, the endless hours of wasted time. On a motorcycle, it is probably the best part of your day. You will want to take the long way home. Why? Because in the city in Estonia we are allowed to lane split (go between cars on traffic light stops), so you are never stuck in traffic. Then you always have a parking spot and never have to pay for it. It boggles me why would you not have a bike in the city.

I also love the skill part of it: you have to learn to ride. Not just how to use the clutch, gas and gearbox, but how to move together with the bike. You can buy the best bike in the world but you cannot buy skill.

And there is always a next level. When you start, it’s exciting just to roll on a straight road, but when this gets boring, there are the turns, the wheelies, the stoppies. On a dirt bike it’s even more exciting – banked turns, jumps (there is nothing cooler then hitting a 20-30 meter jump), logs, ruts, stumps and everything else Mother Earth throws at you. One of my good friends Hans always said that before he started to ride with me, he thought woods were the most boring thing in the world. But with dirt bike every stump is a challenge.

Then I like the financial side of it. This Super Duke 1290 GT is one the most expensive ones of serial production bikes and it costs around 20K euro. That’s the top of the line – 20K. In the car world 20K buys you what these days? VW Golf? To get the same kind of performance in the car world, we would be talking of hundreds of thousands easily.

And this is just a small part of it, just first things that come to my mind. Like I said, I could write a book about it.

How does your wife feel about your motorcycles – does she go for a RIDE with you or wait anxiously at home?

She has a motorcycle license and rides with me every now and then. She is not as super excited about them as I am, but she has supported me every step of the way. I don’t think she has ever said to not buy another one. There was a couple of months some years back when we owned 3 or 4 bikes and did not have a car.

In many ways I think bikes make me a better husband, dad and business owner. I have a slight case of ADD (Attention Deficit Disorder) and riding bikes really helps me to calm down and focus. I have a million things on my mind most of the time but when I am in the saddle, all I can think of is the track and how to ride it. If you don’t focus, you will get hurt or are as slow as a snail. It’s like meditation: most people focus on their breathing, I focus on the track. You can ride in the woods for 3 hours without thinking of anything else. The rest and clarity your mind gets from it is amazing.

What’s funny now I think back to it is that I started a business so I could afford bikes, but vice versa, riding bikes has helped me to become better at business.

My wife has said countless of times when I’m crabby and anxious: “Go take Mirjam (that’s how we call my race dirt bike) out.” Of course there is risk involved but I try to keep high speed on the track and be a bit more calm on the road. Also, I have never held back on spending on protective gear.

Tell us a little bit about the experience of driving KTM Super duke 1290. How does it feel?

Soon you can read it from my blog! I only had it for a short time during our photo shoot but during the next couple of weeks I should have it for some thorough testing. But initial impressions are good. 180hp engine is amazing, you can wheelie it in every gear, it seems. What’s really cool is that it does not scare you but is super easy to ride. I had it for maybe 15 minutes when we got to the spot where we took the wheelie pictures and with no effort at all I got it up where wheelie control allowed.

I would have wanted to get it higher to get a cooler picture but I did not dare to take traction control off – in the end, it was a brand new 20K bike that was not mine. I loved the cornering and the electronic throttle, it was so smooth and nice. I could see myself owning one – and when your friends call you to eat pizza, you can say: “How about pizza in Milan?” and then jump on the bike and get there fast.

How did you end up writing A blog?

This was funny. A year ago I really wanted to test KTM’s brand new adventure bike. It has almost the same 180hp engine that Super Duke GT has but it’s also able to do off-road which you probably realize by now I love. Usually if you want to take a demo ride, they give you the bike for like an hour or two. I approached KTM Estonia to have it for a weekend. Its owner Mart said that I could if I wrote something good about it in Facebook afterwards.

Mirjam, my race bike, is a KTM light enduro bike (2,5 lighter than this Adventure bike), so when I was riding with the big adventure bike, it felt that it’s kind of like dating a girl who is on the plus size compared to the super skinny race bikes, is super confident, fun and somebody you could marry and love every day of your life, not only on weekend track days.

I put the post up and in 24 hours, something like 1500-2000 people read it and I got a lot of good feedback. So I realized that just maybe, someone will want to read what I thought and that would give a possibility to test every new motorcycle that comes to the market.

The blog is not a living and I don’t want it to be. It’s something that I love and like to share.

The hardest thing to figure out was how to dress Andrus so that he could drive but at the same time bring some good ideas for bikers on how to dress. We found out that KTM has their own clothing line called the Powerwear and that Andrus already owns a lot himself from their brand. We had a chance to use the new summer collection pieces: our stylist Alli-Liis picked some which will be perfect for upcoming summer, from light jeans to shoes and riding jacket. 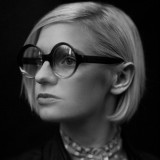